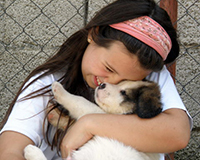 The instinct to dominate other dogs is very pronounced in male Tornjaks. With Tornjaks it is needed to determine who is in charge, who has an upper hand and the dog owner plays a crucial part in this.

If the owner is firm, but calm, the dogs will be more peaceful, there will be less conflict. Tornjaks perceive their owner as someone they either love or fear, they accept him as a pack leader, but not as a typical pack leader, because they never have to worry about the owner approaching their food or a bitch. On the contrary, arrival of the owner means they will be fed, or the owner is the one that will bring a bitch for a love act.

When the dog is near bitch in heat he won’t even notice the owner. All said and done, the owner is either positive or negative character in their life, and they will resolve their problems and continue to strive to be an alfa male, regardless of the owner.
Inherent character traits of Tornjaks are reliability, stability, endurance, flexibility, guarding and defensive instincts, devotion and modesty.
Tornjaks are emotional and intelligent dogs, with peaceful and calm nature.
Due to their natural curiosity young Tornjaks especially enjoy playing with children and exploring the world together, while the relationship of adult Tornjak with children is patient, gentle and protective. 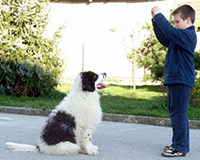 Tornjak is a powerful dog, but his bones are not overly heavy, he is extremely sturdy, neat and square.
The limbs are strong, connected, his movements are dignified and majestic.
They have a scissor bite, strong blunt muzzle, mainly lupoid. The ears are folded, moderately long, the eyes are dark and almond-shaped.

By the age of 12-15 months Tornjak reaches a full height, the mass and weight are developing until 3 years of age. A special feature of this breed is their distinctive coat which is very thick and long, especially abundant in the mane, feathering and tail that is held upright in affect.